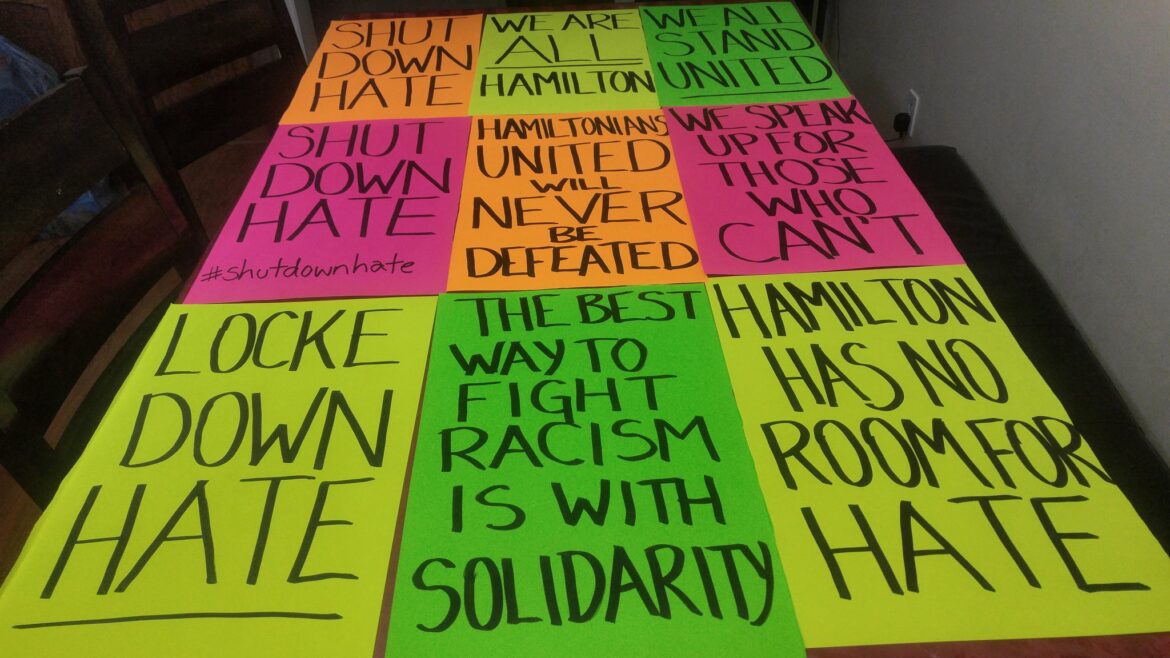 Signs prepared by the Hamilton and District Labour Council for the Shut Down Hate Sidewalk Solidarity Sunday.

White supremacy must be opposed. It has no place in our society and I fully support the plans of the Hamilton District Labour Council to peacefully stand on Locke Street on Sunday in response to a expected march by extremist white nationalists.
Journalist Evan Balgord tracks anti-Muslim and white nationalist movements in Canada, and he retweeted a link to a post by The ARC Collective of what the collective states is a series of private messages planning Sunday’s “Patriot” march.
I served three years in the Canadian Forces, I served with actual patriots of all races and creeds. These white supremacists are not patriots, they are the furthest thing from patriots.
Since the violence of March 3rd , by a group I’ll refer to as a the “Ungovernables”* after their sign, there’s been a great deal of tension and unease in the community. There have been attempts to make it seem that we have to choose one of the extremes. It’s a false dichotomy.
We can (and must) choose to stand for peace, and that’s what I’m going to do.
Violence is not the answer; violence is what both sides wish because without violence they are not relevant. Without violence, they cannot gain the attention they seek.
I’m opposed to both the white nationalists and the Ungovernables. I continue to support the Charter Right to Free Expression; which includes the ability of people to use expression for purposes that I strongly dislike. It is our duty as residents in a free and democratic society to peacefully oppose hatred and violence; to opposed vile speech.
The more of us who stand peacefully on Sunday, the stronger the message will be that our Hamilton is a welcoming city that aspires to be the best place to live in Canada.
I considered not standing on Sunday, fearful for my safety knowing that my stance against extremism in all forms will make me a target. I understand that many of you reading share similar concerns for your own safety. The best way to ensure our safety, and the safety of our neighbours, is for us to stand peacefully in large numbers.
I’ll be joining the Labour Council’s peaceful stand against white supremacy on Sunday. I’ll continue to make sure white supremacists are not welcome in our community; and will continue to stand with my neighbours.
See you at 11am on Locke Street tomorrow.
* I use the term ungovernables instead of the more common anarchists to be more precise in my condemnation of the violence of March 1st. Peaceful political speech must be protected, and lumping peaceful proponents of anarchist political philosophy with the violent suspected anarchists of the ungovernables is harmful to our civil society.

0 thoughts on “Coleman: We Must Peacefully Confront Extremism: I'll Be Standing Peacefully Tomorrow, You Must Too”