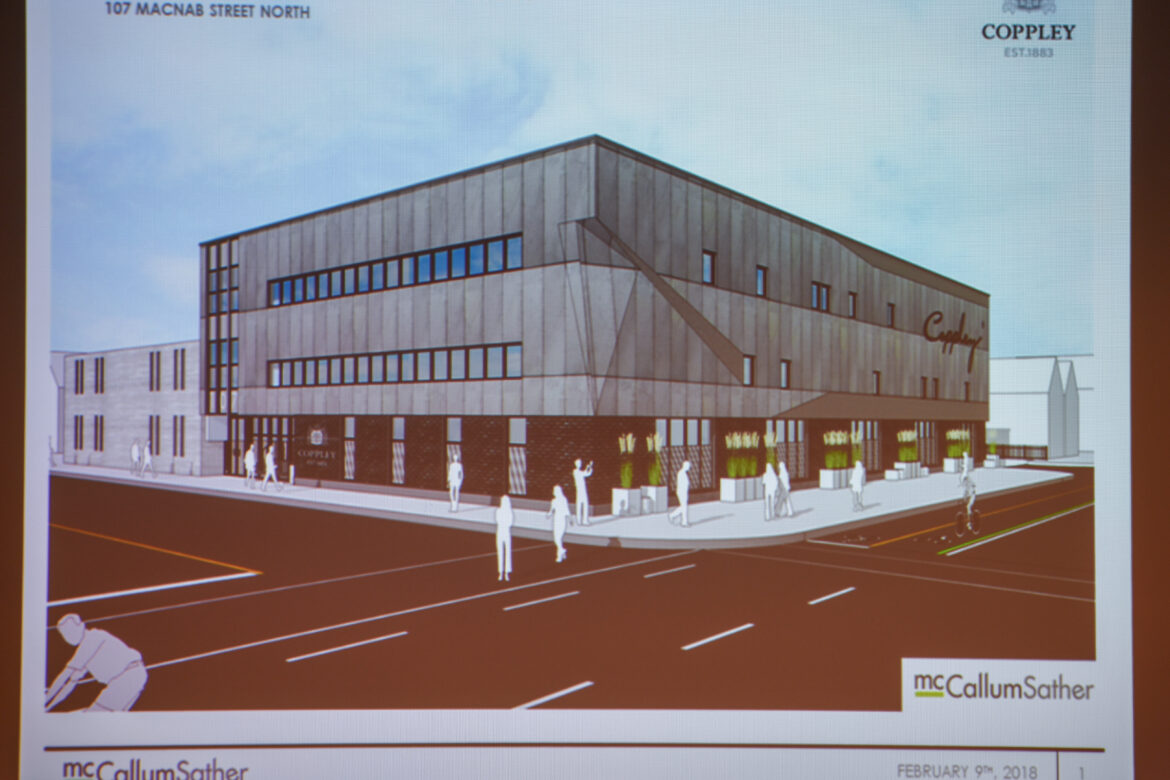 Concept of the proposed new Coppley Manufacturing and Headquarters Building at 107 MacNab Street North as presented to Hamilton's Design Review Panel in February 2018 on an overhead projector.

Premium tailored clothing company Coppley is planning a new 6,822 square metre three storey manufacturing facility in Hamilton’s Downtown, just down the street from their present headquarters.
Founded in 1883 as John Calder & Company, Coppley is a Downtown Hamilton landmark with their current headquarters at 56 York Boulevard across from the Hamilton Farmer’s Market.
The new facility will enable the company to enhance its manufacturing processing while remaining in Downtown Hamilton, architect Drew Hauser told the City’s Design Review Panel on Thursday.
“Staying in the Core is a key part of their business plan,” Hauser said. “85 to 90 percent of their staff use public transit”.
The proposed manufacturing facility was reviewed by the Design Review Panel, with the panel providing positive feedback to the architectural team from McCallumSather.
“I think it’s so cool that Coppley is staying Downtown … I think its totally something to be celebrated”, said DRP member Colin Berman, a landscape architect. He felt the initial design is understated. “I’m not sure if you’ve gone far enough to celebrate this use Downtown”.
DRP members suggest many tweaks to the initial design. Berman suggested the design of the corner at MacNab and Cannon should be a display for the “latest and greatest suits” designed by Coppley, or another form of interaction with the street.
Members strongly encourage the architect to install a lighting system for the loading bay on the west side of the building which which enters and exits onto Cannon Street across the Cannon Cycle Track. Members wish to see the loading bay needs “screened” to continue the street wall design of the building for the full length of the north facade.
Suggestions were made to modify brick and metal design on the facades to be more “visually interesting”, and better animated to the street, by “paying homage to the patterns of fabric”, use of more brick, and “warmer tones”.
DRP member Tim Smith, a Registered Professional Planner, said he the design should reflect Coppley’s historic building on York Boulevard, and suggested the architect work to minimize the “steel metal treatment” considering surrounding houses are primarily built with brick materials.
“It’s a building that just seems so out of context for me, compared to both the historic Coppley buildings and the surrounding buildings”, Smith said.
A large area of the upper floors of the planned building require climate and light control due to the nature of the fabrics used in creating suits; members of DRP suggested various means of compensating for the lack of windows on the upper floors.
The development will include demolishing the existing Coppley warehouse on the site. The existing administrative offices will be integrated into the new building.
Overall, DRP was very supportive of the project.

Kimberly Harrison-McMillian, the manager of the City’s urban planning team, says Coppley has not yet submitted its final planning application for the development.
“We’re going to do everything we can to assist this application”, Harrison-McMillian told The Public Record after the meeting.
Hamilton’s Chief Planner Steve Robichaud attended the meeting, and says the Planning Division is happy to see Coppley growing in Hamilton, and remaining in the Downtown.
Glen Norton, Hamilton’s Director of Economic Development, says the expansion is “good news for all of us”.
“Coppley has deep roots in this city”, Norton says. “We will do whatever we can to assist in the physical move and modernization”.
The design will be further developed, and return to the Design Review Panel for comment after the planning application is submitted.
Construction timelines were not discussed at the meeting.
After the meeting, architect Drew Hauser said Coppley’s management will be sharing details of their plans in the near future, first with their employees. 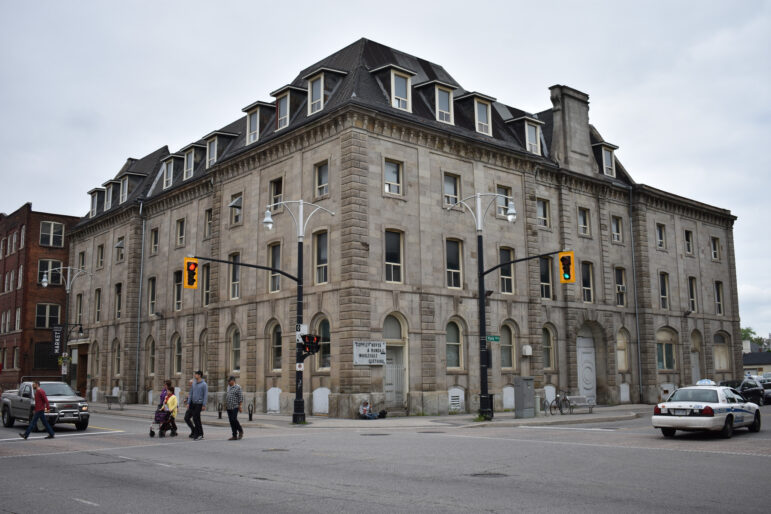 The future of the existing Coppley building at 56 York Boulevard was not discussed at the meeting.
The building’s owner, and his family, have continuously opposed heritage designation for 1856 building. The building is separatedly owned from the company. Coppley has been owned by New York based Individualized Apparel Group since 2012.
In 1979, Hamilton’s Board of Control approved heritage designation of the building. The owners appealed, and in 1980, the Conservation Review Board upheld the City’s designation.
Council never implemented the enacting by-law, but due to the CRB ruling, the building enjoys the same heritage protections as a designated buildings.
In March 2015, Chief Planner Robichaud updated the Hamilton Municipal Heritage Committee on the heritage status of the building, writing:

The property is currently subject to the Notice of Intention to Designate from
1979. By maintaining the status quo, the City would continue to manage change
to the property through the Heritage Permit process as if it were designated, as
per the provisions of the Ontario Heritage Act. However, the property would not
be eligible for a City designation plaque, nor would it be eligible for the City’s
financial incentives for protected heritage properties.

At the time, Enkin family – which has owned the building since the 1950s – continued to opposed designation. City staff say they are not aware of any change in ownership or position on designation by the building owners.
The next meeting of the Hamilton Municipal Heritage Committee is February 15, and it can be expected the Committee will seek an update from staff on the status of the building.
The Globe and Mail recently published a feature on Coppley’s Hamilton operation and the history of the company.