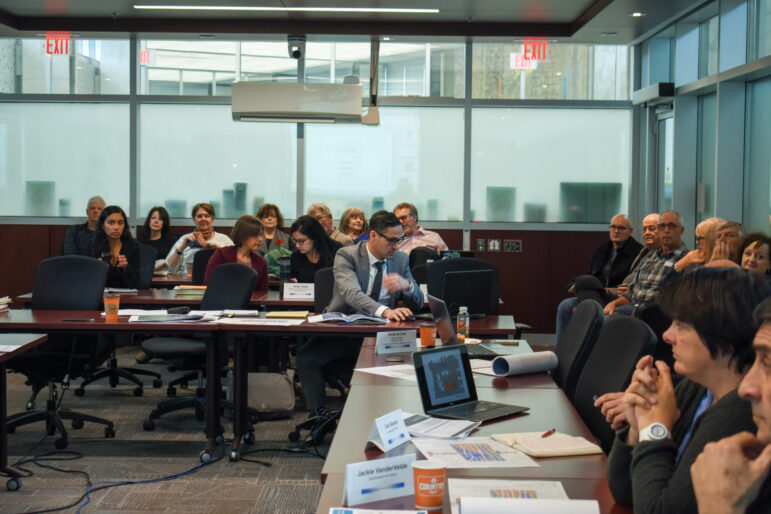 The public seating in Room 264 was full for the Design Review Panel’s discussion of the Television City project.

Hamilton’s Design Review Panel, a group of experts in architecture, planning, and urban design, meet on November 9 to review Brad Lamb’s proposed 40 and 30 storey buildings connected by a one story podium with underground parking.
The developer has posted his Design Review Panel documents on the project website here.
The 40 storey building is proposed to be 131.5 metres in height, which would make it the tallest building in Hamilton as measured from base to top. Being on one of the highest elevation points in the Lower City will increase its presence on the skyline.
The property at 163 Jackson Street West is the present home of CHCH Television’s administrative offices and broadcast studios.
Panel member Yasin Visram was the first member to ask questions to Brad Lamb’s planner. He questioned the density, concerned that the two towers on the site represents over-densification, suggesting there should only be one tower on the property. He expressed skepticism on having one shared electrical room, and the statement by the planner that there will be no adverse wind impacts at street level from the structure. Visram stated “it’s hard to believe” there are no concerns from the planner on wind impacts.
Registered Professional Planner and panel member James Webb was very skeptical about the plan and its height being greater than the escarpment. He asked many questions on the geometrics of the site, and was particular critical of the developers team for presenting building heights compared to the escarpment without consideration of the elevation of the ground at each site.
Webb defended Hamilton’s new Downtown Secondary Plan which allows for a conditional maximum height of 30 storeys. Webb said the plan has found the correct balance for intensification across the Downtown area. He stated that over-intensification of certain areas of the Downtown will have negative effects for the City.
It was panel member Vincent Colizza, an architect, who provided the most direct statement asking “Do you feel it’s appropriate to have 40 stories across single family homes?”.
Caroline Street South across from the site and the homes on Wesanford Place are a unique district within the Downtown. Along with Whitehern, they are the only properties in the Downtown Secondary Plan with a strict 3-storey single family home height limit.
Colizza strongly expressed opposition to the “aggressive take on the site”, and was very forceful that the plan must be changed to comply with the Secondary Plan’s 12.5 metre setback from neighbouring property lines.
Colizza applauded the proposed public plaza and protection of the heritage designated home on Jackson Street, saying it will add greatly to the public realm.
No member of the panel agreed with the proposed height, with some suggesting that even 30 stories may not be appropriate for the site.
The applicant’s development and rezoning application is available on their website. A date for the proposal to be debated by City Council’s Planning Committee has not been set.
CORRECTION: The original version of this story stated the homes on Wesanford were a Heritage Conservation District. They are not. Their character is enshrined in the Secondary Plan. I regret the error. 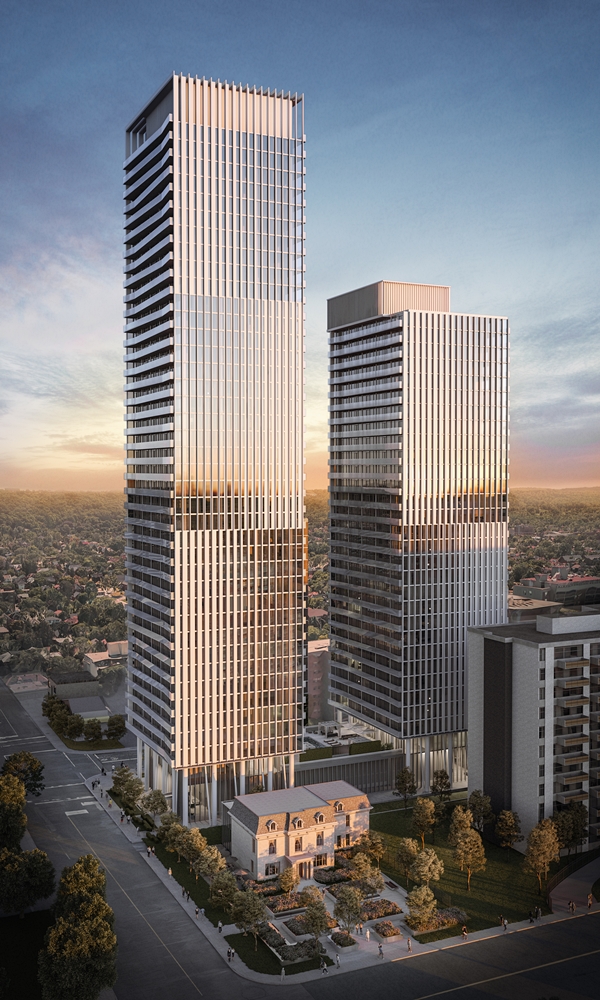