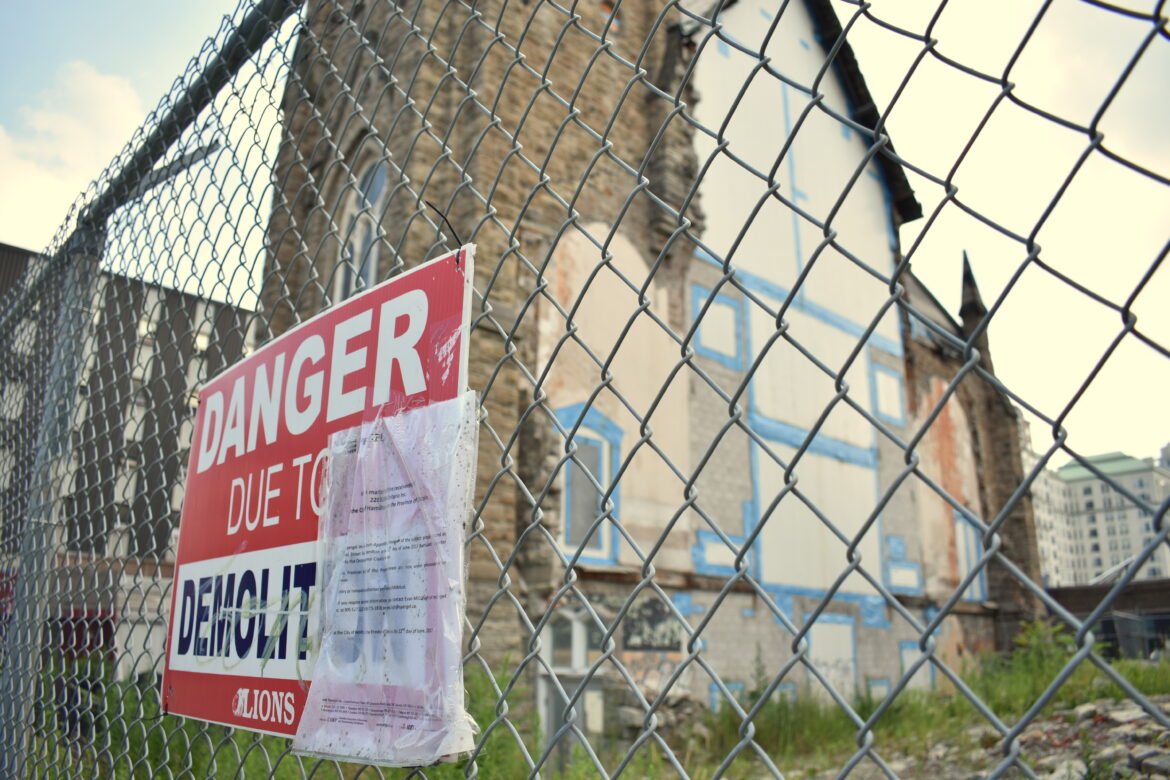 The remaining portion of James Street Baptist Church stands behind fencing with the Receivership Notice posted announcing the bankruptcy of The Connolly project.

The fate of what remains of the James Street Baptist is in doubt as the numbered company which owns the Church is now in receivership.
Stanton Renaissance was marketing a 30-storey 269-unit condominium tower for the site at 98 James Street South in Hamilton’s Downtown Core.
This is just the latest company owned by Louie Santaguida to enter into bankruptcy.
In spring, Stanton’s On the Go Mimico project entered into bankruptcy, leaving around 200 people without their hoped-for condos. (The buyers received their deposits back as Ontario law requires they be held in trust)
The receivership is the result of an application by Duca Financial Services Credit Union Ltd. (Duca) , the holder of the first mortgage in the amount of $5,000,000. The building was purchased from the Church in 2013 for $610,000.
The first mortgage was issued on July 8, 2015 to provide financing for the proposed condominium. When the mortgage was applied for, Stanton reported 114 presale agreements, the condo was planned to have 269 units, meaning 42% had been sold when the first mortgage was issued.
Duca’s filing says there are five mortgages on the property. The second mortgage is related to deposits for pre-sales of condo units, the third is secured against the bankrupt Mimico project, and both the fourth and fifth are held by Santaguida’s wife MaryLou.
Duca decided to not renew their mortgage the term expired on September 8, 2016, and after not being about to secure payment from Stanton.
In December, Duca filed application to the courts to initiate Power of Sale processing.

UPDATE: The City of Hamilton says “The $106,127.62 identified are the 2016 taxes levied, not the arrears. The 2016 taxes have been paid in full. The 2016 taxes were paid by the instalment due dates, so they were never in arrears for 2016.”
The Credit Union voluntarily restrained from proceeding with Power of Sale this spring, Duca says that Santaguida and his lawyer had been negotiating with potential investors to refinance or restructure the project.
On May 31, Sergiu Cosmin, Manager of Special Accounts for Duca, writes that he was informed by the lead representative of the potential investors that talks were “then at and end”.
On June 22, the courts ordered the receivership. 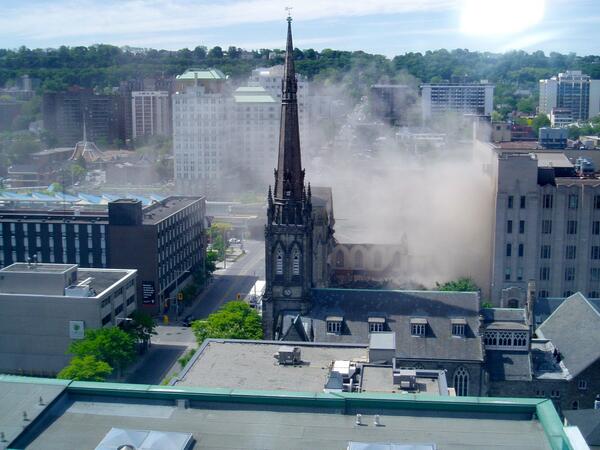 Prior to arriving in Hamilton, Santaguida was trying to develop in Brantford.
One of Santaguida’s companies was involved in a planned Brantford brownfield remediation development at the turn of the decade. The deal ended in 2011 when Brantford Council voted to end its relationship with Santaguida.
“Under no circumstances would I ever go into business with this company after all that has happened,” Mayor Chris Friel was quoted in The Expositor at the time. Friel stands by his statement to this day.
In June 2014, The Spectator ran a lengthy article about Santaguida’s history of bankruptcies.
Despite Santaguida’s history, and warnings from Brantford’s Mayor, Hamilton’s Ward 2 Councillor Jason Farr embraced Santaguida with open arms.
Farr assisted Santaguida’s demolition permit application for the designated heritage church. When public concerns were raised by the Durand Neighbourhood Association, and other civic groups, City Hall converted the application into a “minor alteration” permit, allowing for the demolition of the Church without any public hearings.
The proposed condo was approved by Council in 2015, and for the past two years, Santaguida stated the building was 75% sold and on the verge of groundbreaking for construction. Nothing was happening on the site to indicate construction was about to begin. 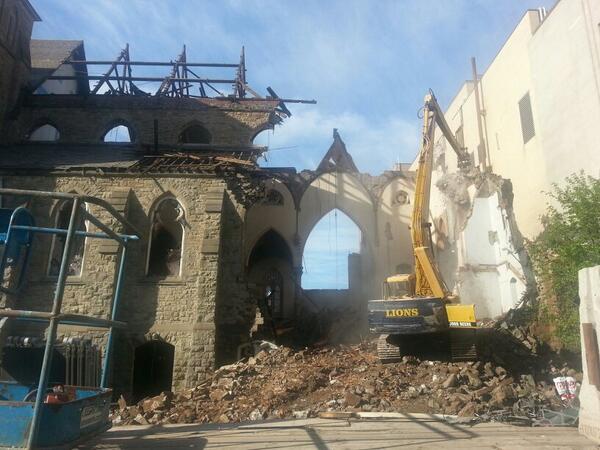 “Minor Alteration” of the James Street Baptist Church in June 2014

In April, when Santaguida’s Mimico went bankrupt, raising serious questions about Stanton Renaissance, Farr maintained the Connolly will move forward. The City said at the time they spoke to Santaguida and the Hamilton project was securely moving forward. Farr said at the time he was reassured by the communications.
This afternoon, following the receivership, Farr claims to CBC that he hasn’t spoke to Stanton or Santaguida in “well over a year”.
Hamilton’s heritage committee meets on Thursday, and citizen members of the committee – who fought to see a proper process on this site in 2013 – will have the opportunity to ask City staff questions about the future of the remaining front portion of the church.
Court-Appointed Receiver Spergel posted notice to the site:

IN THE MATTER OF THE RECEIVERSHIP OF
2203284 Ontario Inc.
of the City of Hamilton, in the Province of Ontario

1. msi Spergel Inc. was Court-Appointed as Receiver of the subject property located at 96 James Street South, Hamilton, on the 22nd day of June 2017 pursuant to an order issued by the Ontario Superior Court of Justice.

2. This Premises and all of the Property herein are now under the possession of the Receiver.

3. Entry or removal by unauthorized persons is prohibited.

4. If you require any further information, please contact Evan McCullagh of mis Spergel Inc. at 905 527 2227 or emccullagh@spergel.ca

Dated at the City of Hamilton, in the Province of Ontario, this 22nd day of June 2017. 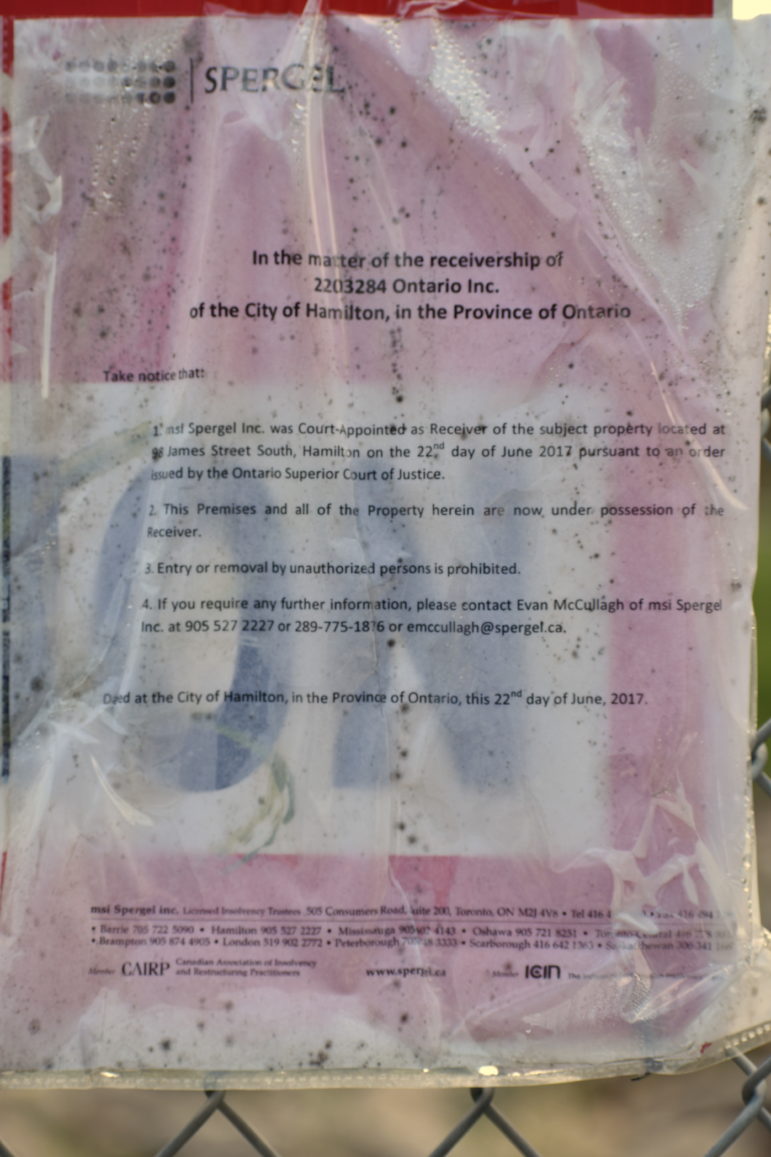 Story Updates
July 17 – Updated with statement from City of Hamilton that property is not in tax arrears.

0 thoughts on “The Connolly (James Baptist) Development In Receivership”