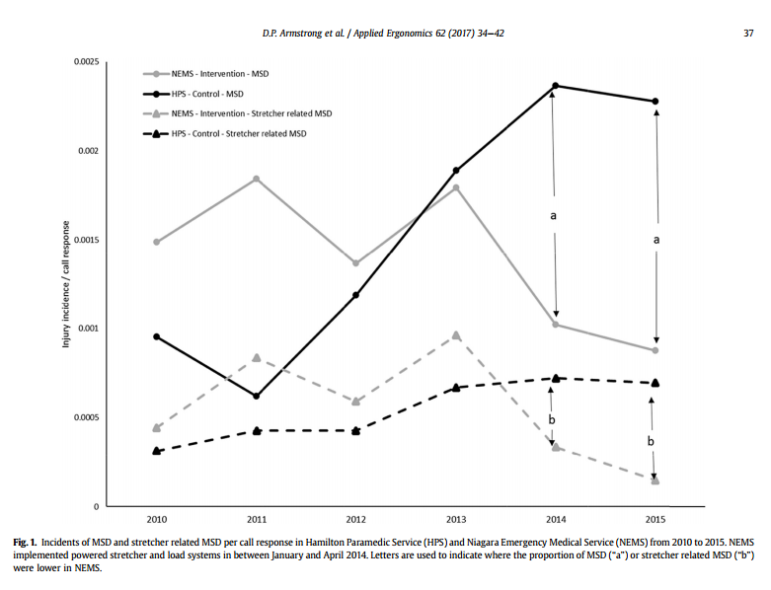 Paramedics are increasingly challenged by increased rates of obesity among the population. In addition to patient weight, stretchers themselves add to the overall weight a team of two paramedics must lift when transporting a patient.
The researchers state:

Traditionally, stretchers have been manually operated by a team consisting of two paramedics. Stretchers are operated to: lower or raise the cot surface to facilitate patient transfer, transport, or repositioning; push or pull the stretcher while transporting a patient from the scene to the rear of the ambulance or from the ambulance into a hospital; and, to load and unload the stretcher into and out of the rear of the ambulance. The physical exposures to these activities, considering trunk strength and spine compression are high, in some cases described as exceeding well-established threshold limit values such as the NIOSH [CDC – The National Institute for Occupational Safety and Health] action limit for spine compression

On May 25, 2015, Hamilton City Council’s Emergency and Community Services Committee voted to approve the purchase of power stretchers for Hamilton’s fleet of ambulances. (VIDEO of discussion and vote)
The Public Record emailed City staff requesting an update on the implementation of power stretchers
Hamilton’s Chief Paramedic told Councillors the implementation of the systems would result in cost-savings from decreased injury costs among paramedics. During the May 2015 debate, Councillor Tom Jackson expressed some concerned that Council is often told there will be cost-savings, but the savings do not materialize.
The research paper states the Niagara experience shows the costs of purchasing more expensive power stretchers is recovered over a seven-year period from decreased injury costs.

Our cost-benefit analyses revealed that the added
costs associated with a powered stretcher and load system intervention would be completely recovered within the stated 7-year service life of the system. Perhaps, more importantly, when replacing powered stretcher and load systems after the 7-year service life cycle, the return on investment is likely to improve as employee training is no longer a requirement.

The study ends by noting the need for further monitoring of power stretcher use to watch for new injuries resulting from increased stretcher weight in non-powered use:

The power stretchers were over 25 kg heavier than the manual stretchers previously used within the service, which may result in increased forces when pushing or pulling the stretcher or when boosting it up and over a small obstruction, such as a curb. The reported injury data did not permit us to drill down on specific activities that may have led to a stretcher related MSD, but given the increased weight of the powered stretcher, this may be important to monitor in the future.