Update: During this meeting, Council deferred decisions on fee increases, and transit cuts. The following day, Friday March 24, 2018, Council voted to increase recreations and parking fees, to “defer” the transit strategy until 2018, to freeze transit fares in 2017, and to defer a few line item enhancements.

In a series of budget changes released yesterday afternoon, Council will vote on proposals to cut transit, increase recreation user fees by 7% this year, possibly increase transit fares by five cents for a single fare, and defer items into the 2018 budget year.
If all the cuts and fee increases are approved by Council today, the tax increase for an average residential assessment of $315,000 for 2017 will be $76 – which equates to a $24 increase for every $100,000 in assessed property value.
This does not include any increases to education taxes.

Council will vote on “deferring” transit purchases and improvements until 2018 to decrease the 2017 City budget by $5,065,000.
Cuts to HSR service are proposed which will primarily target Mohawk and McMaster students by eliminate peak demand “extras”. One “extra” being removed will increase wait times and bypasses for people trying to get to jobs at the Ancaster Industrial Park, and another will eliminate one rush hour bus from Dundas. 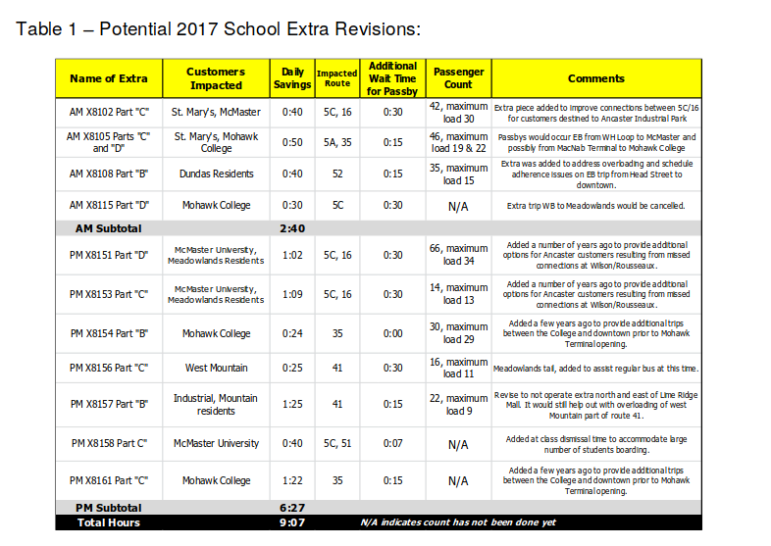 Chart of HSR Cuts for 2017 as proposed in new City budget.

Transit cuts are the largest item change in the new budget released yesterday.

Council is using the term “deferred” to describe the decision to not implement Year 3 of the HSR Ten-Year Transit Plan. The motion presented today calls for Council to continue the plan in the 2018 election year budget. 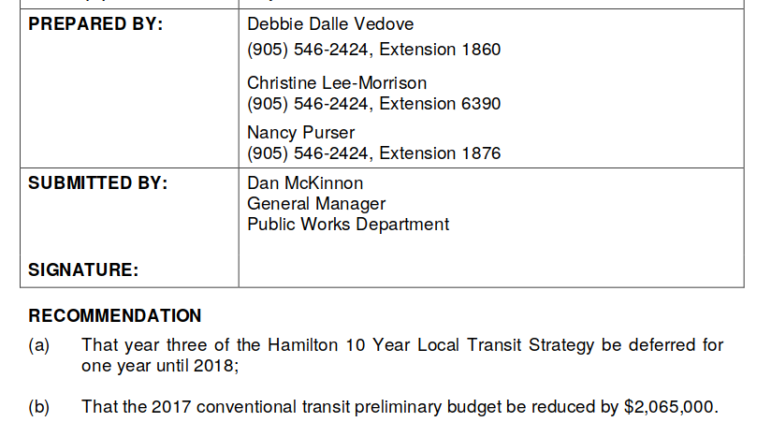 However, the staff 2018 budget outlook presentation slide does not show the continuation of the Transit Plan as a budget pressure in 2018 – only showing a 0.5% increase for DARTS in the forecast.
The third year of the Ten-Year Strategy is the first that required levy-funded operating budget increases. The first two years were intended to be funded entirely from fare increases. However, a decrease in ridership caused the HSR to be over-budget in 2016.
The official staff report says fares will be frozen as part of the “deferral”, however, in staff rough notes accidentally uploaded with the report, staff write “Is the idea of $0 fare increase OK or will council support $0.05 increase”. 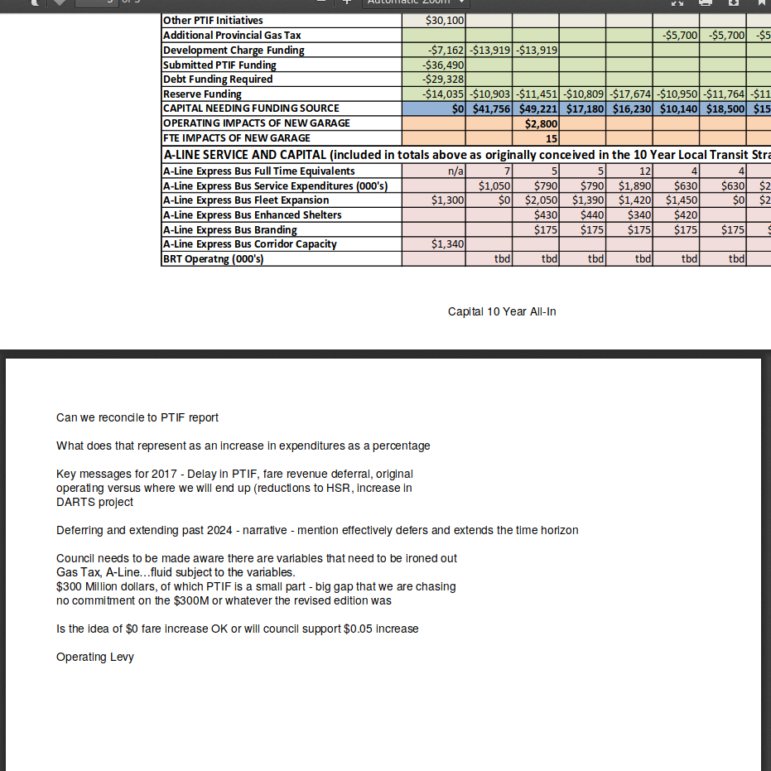 Staff Notes added to the report, show consideration of a 5 cent fare increase, in place of the planned 10 cent. 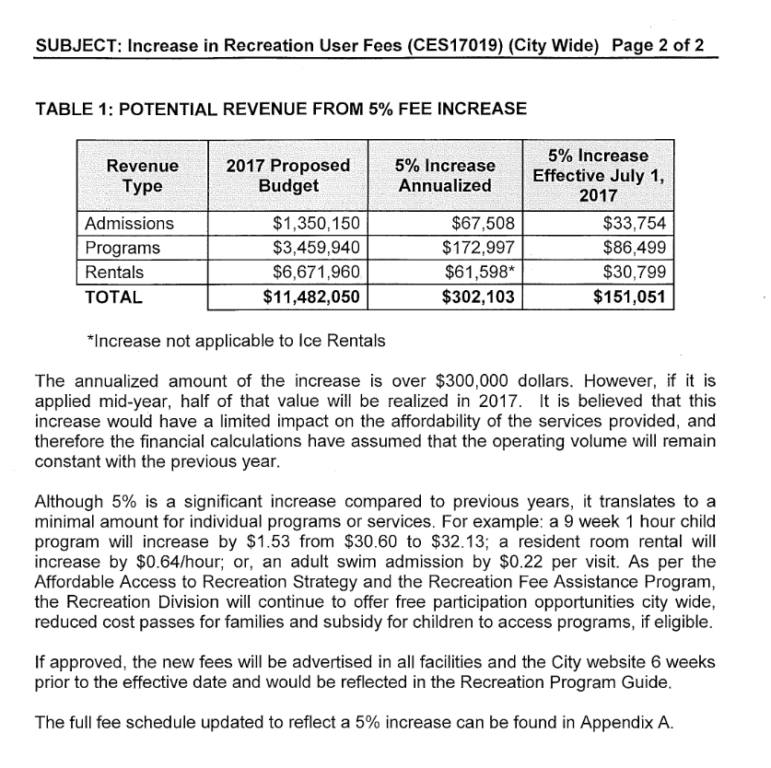 Council will vote on a proposal to increase recreation fees by an additional 5% beyond the 2% increase implemented on January 1, 2017.
The fee increases are expected to raise $33,754 from increased admission fees, $86,499 from program fees, and $30,799 in rental fees. The increases will not apply to ice rentals.

Council will vote on a staff recommendation to keep DARTS as a public non-profit operation funded by the City, extending its operating agreement with the City by another three years until June 30, 2020.
The privatization of DARTS was strongly opposed by the two City advisory committees – the Seniors’ Advisory and Advisory Committee for Persons with Disabilities.
DARTS will be granted a $235,000 budget increase for 2017.
The union representing DARTS employees ran a successful lobbying campaign to keep the service as a public non-profit.

Free HSR Rides for Bicyclists Up and Down the Escarpment

Staff are proposing to implement free usage of the HSR for bicyclists going up and down the escarpment. They expect minimal budget impact as the buses are already operating. The launch date is planning for May 29 – Bike to Work Day.

Council will reconsider its decision to not increase funding to Public Health’s outreach efforts in the opiod crisis.
A motion calls for Council to fund “an additional 0.2 FTE (Van Outreach staff), at a total cost of $12,261, to increase the needle syringe van by four hours per week, with the addition of a new four hour shift on Sundays (8:00pm to midnight)” and to fund “an additional 0.5 FTE (Public Health Nurse), at a total cost of $56,813, to provide an increase of 17.5 hours per week for a Public Health Nurse to respond client calls respecting opioid overdose and the provision of Naloxone.”

Other Deferrals and Gaping

Other costs are being deferred to 2018, Council is planning to use more gaping in vacancies, downgrading positions upon retirements, and to practice strong oversight of financing strategies.