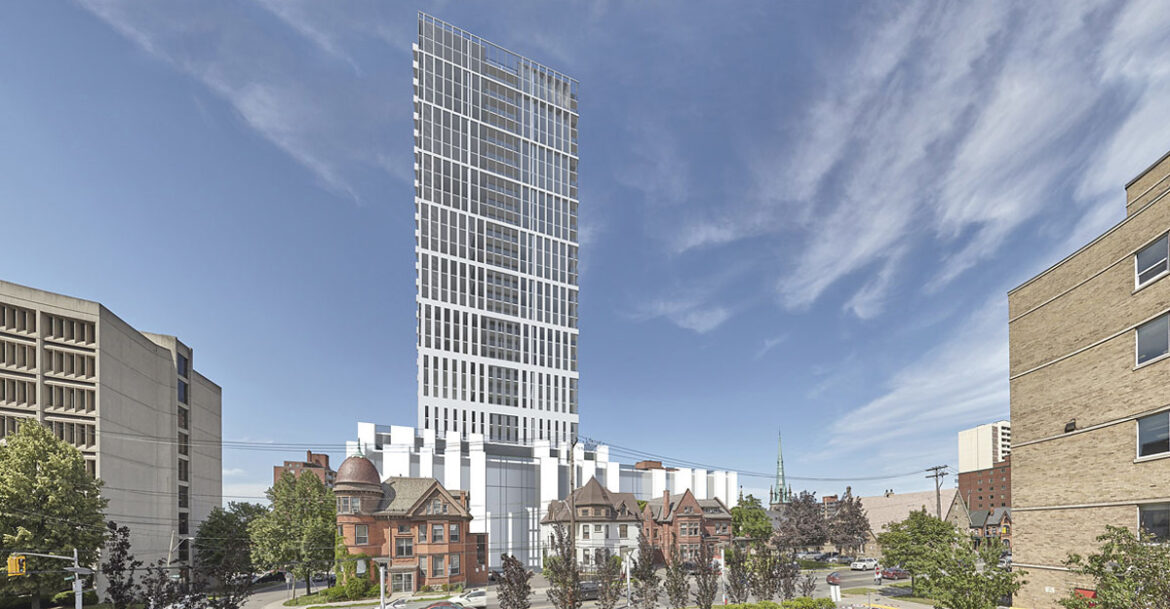 It represents only a concept plan, there is no planning application. It is not constrained by official plans, finances, heritage concerns, or good old-fashion Hamilton political hand shaking.
Nonetheless, it’s a plan worth noting, thinking about, and discussing, because it starts a conversation about potential high-intensity redevelopment of Hamilton’s low-density downtown blocks.
SvN Architects + Planners posted a Master Plan for the Charlton/John/Forest/Hughson Block which shows a 30-storey mixed-use tower to anchor the block at the corner of Hughson Street South and Forest Avenue.
The building would replace older brick houses used as professional offices along Hughson and Forest, retain the heritage houses used by St. Joseph’s on Charlton Avenue East, and a second phrase mid-rise on the courtyard and a partially demolished portion of the (Anglican) Church of the Ascension. 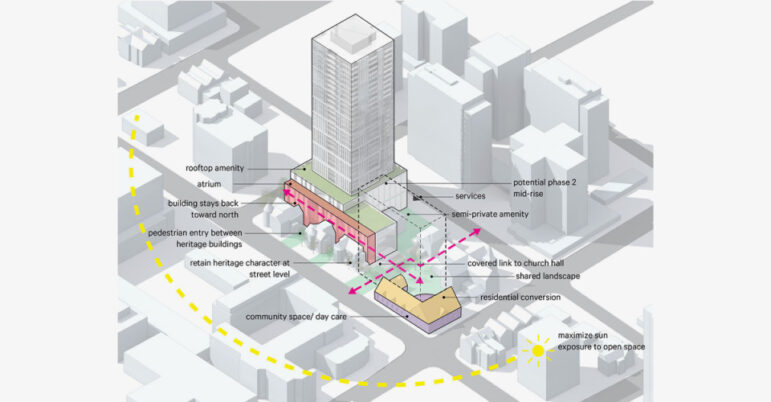 The concepts were done for a company called Nostra.
With high density institutional to the south in St. Joseph’s Hospital and tall residential mid-rise building to the south, only three blocks from the GO Centre, this is a prime block for high-intensity building.

SvN as a Player in Hamilton

SvN recently completed work as the consultant for the City’s Tall Building Study. They also presented to Council on municipal bonusing during the May special Planning Committee meeting on inclusionary zoning and density bonusing.
Further, SvN is the firm where the City of Hamilton’s General Manager of Planning and Economic Development practiced prior to joining the City’s senior management team.
They are not getting any special treatment from City Hall, planning firms often act as consultants for the City, and Thorne’s previous employment with the firm doesn’t give them special access. It does mean they have a good idea of how Thorne views planning, but even there, there isn’t much discretion to the GM in the new planning policies being passed.
SvN’s knowledge of tall buildings, knowledge of the Planning Act, and the Provincial Growth Plan, means that while this officially represents ‘just a concept’, it’s well worth watching this block for development once the City finalizes the updates to planning policies in the coming few months.