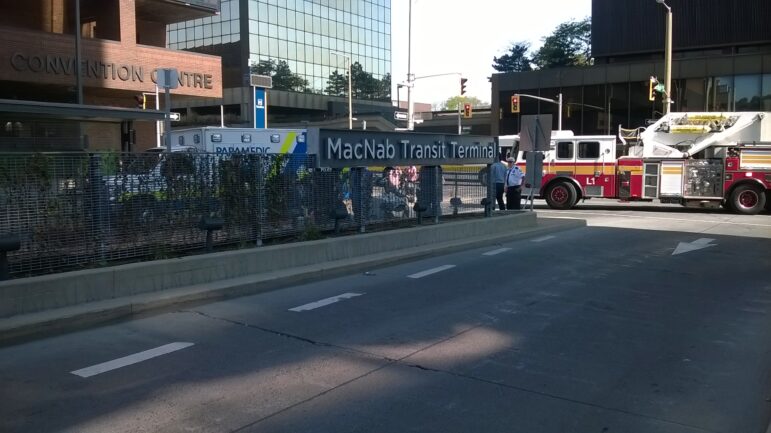 Paramedics and firefighters tend to a woman struck by a HSR bus on July 21, 2016 at the MacNab Transit Terminal

A woman is in hospital with serious injuries after being struck by a bus at the MacNab Transit Terminal shortly before 10 a.m. this morning.
The incident is being investigated by Hamilton Police.
The woman, in her 20s, was struck on the drivers side of the bus a few metres south of the pedestrian crossing at King Street. She was struck to the west of the island dividing the two sides of the terminal.
Witnesses state her foot was run over by the wheels of the bus. Bystanders assisted the woman until firefighters and paramedics arrived. First responders carefully treated and immobilized the woman before transporting her to hospital with serious non-life-threatening injuries.
Hamilton Police reopened the east side of the MacNab Terminal shortly before 11am, the west side remains closed for the ongoing investigation.
The Hamilton Police investigation is ongoing.