Ward Two Councillor Jason Farr and developer Wilson Blanchard have reached an agreement to demolish two and rebuild the facades of the other two historic buildings facing Gore Park at 18 to 28 King Street East in Downtown Hamilton.
The proposal was a surprise walk-in delegation at today’s Council General Issues Committee.
Councillors voted unanimously to have staff review the proposal and report back at the May 4, 2016 Council General Issues Committee. 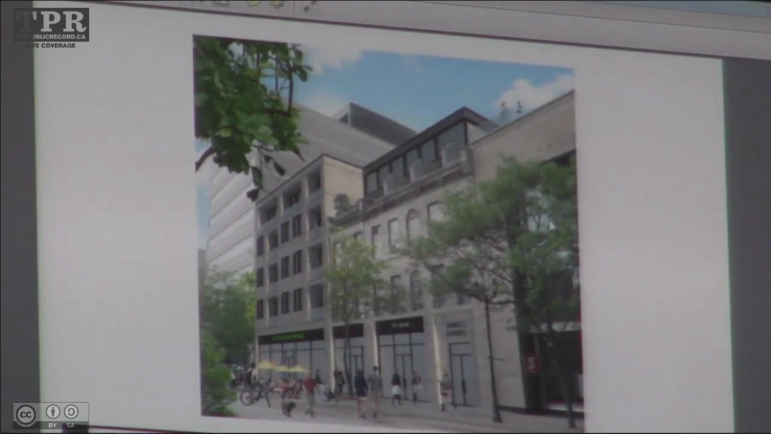 Wilson Blanchard’s lawyer Tim Bullock and architect David Premi presented Council with a five-storey building proposal which will include 14 residential units on upper floors and 3,000 sq ft of retail on the ground levels.
The proposal will involve the complete demolition of the two easternmost buildings at 24 and 28 King Street East and preservation of the facades at 18 and 22 King Street East with the demolition of the remainder of the buildings.
Bullock told Councillors the developer is willing to build as soon as they gain site plan approval from the City and before securing tenants for the building.

The Process and Heritage Designation Tribunal.

Ward Two Councillor Jason Farr walked the delegation and staff report motion onto the Council floor today without notice.
Asked by The Public Record why he didn’t give notice, Farr said the deal between him, the developer, and the City was reached in the past few days. Farr says the momentum for the project is positive, reflective of the growing strength of the downtown economy and that the developer is willing to build without having tenants in place. He stressed there was no urgency to walking the motion onto the agenda today, and he did so solely for convenience and momentum.
Farr stressed that today’s presentation was the first step and nothing has been decided, that the developer is interested in attending Heritage Committee in April, and Farr will receive public input before Council makes it decision when the staff report returns in early May.
The heritage designation passed by City Council in December 2013 is being challenged by Wilson Blanchard and a pre-hearing was scheduled for today.
The hearing was adjourned. By giving staff direction by the motion today, Council enabled the adjournment of the hearing. 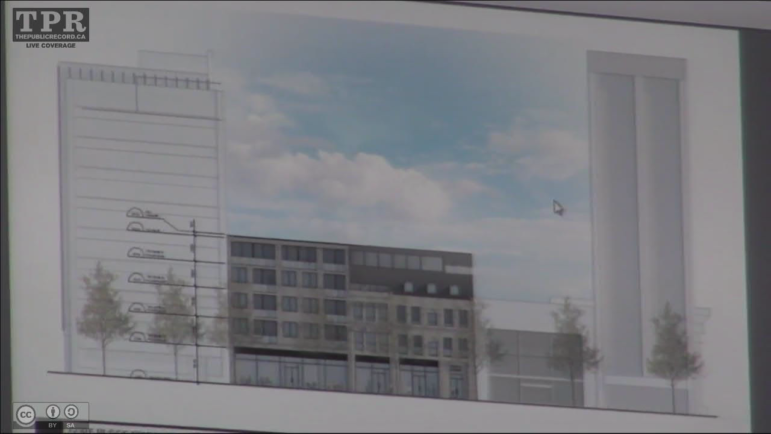