City staff released the Pier 7 & 8 Urban Design Study yesterday evening.
The 116 page report is the result of years of planning and a lengthy series of public meetings on the future of the valuable lands along the West Harbour waterfront owned by the City of Hamilton.
The final proposal maintains the nine development blocks presented at earlier public meetings and will not surprise anyone paying attention to this file. Overall, the final plan calls for 110,000 square feet of new residential units for a total of 1,071 to 1,531 new residential units with 1,422 parking spots integrated into the buildings and a centralized parkade.
The perimetre of Pier 8 will become a urbanized public access area with patios, an artificial beach, bike and cycle path, and other amenities. The existing park on the west portion of the pier will remain, and public art will be added throughout the perimetre.
The report proposes building in phases, starting along Guise and moving closer to the waterfront in phases.
The final Urban Design Study calls for “a high quality waterfront with a mix of public activity areas”,  “diversity of architectural styles and building massing”, and a “human-scaled development that frames the streets and open spaces”. 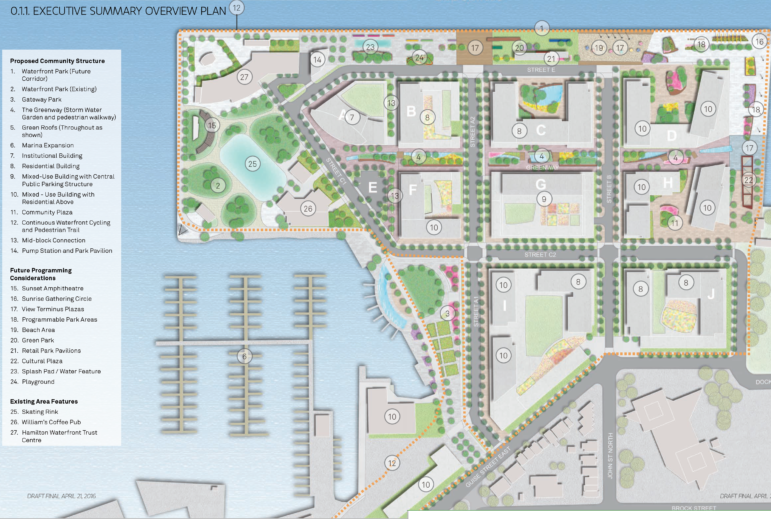 There is the implementation of green roofs, a “greenway” storm water capture area which also serves as a pedestrian and bike path, and a focus on green technologies to reduce the environmental footprint of the new residents.
The Urban Design Study says there are elements requiring  additional study, including affordable housing.
There is one remaining community meeting on the Urban Design Study scheduled for Monday, May 2, 2016, 7pm at the Waterfront Banquet and Conference Centre at 555 Bay Street North.
Council will begin consideration of the Study at a special West Harbour Development Sub-Committee to be held at the Hamilton Waterfront Trust Building on Thursday, May 5, at 3pm. Seating will be limited and on a first come, first serve basis.
(As The Public Record’s media credential was revoked for “eavesdropping” on public meetings at City Hall, I cannot guarantee I’ll be able to get in the room to cover this public meeting)
Following this, the proposal will go to Planning Committee on Tuesday, May 17, and be ratified by City Council on Wednesday, May 25.
The full report and appendices are available on the City of Hamilton website’s Piers 7 and 8 Urban Design Study page. https://www.hamilton.ca/city-planning/planning-community/piers-7-and-8-urban-design-study