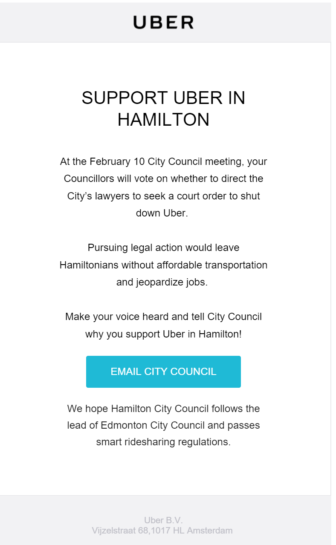 Uber may know how to beat the taxi industry, but is completely loss at how to win votes from City Council. Instead of mobilizing people into the Council Chambers, they wasted their energy on an email campaign in an attempt to defeat a motion to seek a court injunction to shutdown the taxi-type ride connecting service they operate.
Ironically, the injunction portion of the motion was removed prior to their email campaign.

UPDATED: Merulla’s motion was updated with the injunction removed just prior to the email campaign.

In an attempt to stop the injunction, which was removed anyway, Uber used their nuclear option – calling on all of its Hamilton app users to email City Council opposing the motion.

Tens of thousands of people received an email (pictured above) from Uber calling on them to “Email City Council” and the results are uber-disappointing.
At 2pm Tuesday, I asked Ward 3 Matthew Green’s executive assistant how many emails the Councillor received on the topic. Just over 575 emails.
Tens of thousands are people are asked to email blast City Council and the result is 575 emails? Uber, you might be upending the oligarchs of the taxi duopoly in Hamilton, but are clueless on how to pressure local politics here.

Our Council does not respond to online or digital campaigns. Those platforms are only effect when they drive people to the public gallery at City Hall.
Even if Uber could mobilize an army to produce tens of thousands of emails, it wouldn’t matter to City Council.
A couple dozen phone calls from actual constituents, maybe.
Two-hundred people showing up at City Hall for the Council vote on the future of the local taxi industry and Uber’s place in it – that’s how you influence City Council.

If Motion Passes, What Happens

. If Council did consider an injunction, which was withdrawn, it’s the safer bet for them to pass a motion calling for one.
Politically, it will please the taxi plate holders, and will have no effect upon Uber’s operations. The taxi industry will be pleased with the City’s actions and Uber users will not notice as Uber will continue operating and paying fines.
From a purely political calculation, nobody will march on City Hall if the status quo prevails.

UPDATE: the above paragraph is no longer relevant with the amendment.

City to Look at Edmonton Reforms

The second part of Merulla’s motion is a promise to review licensing bylaws “to create a level playing field for the taxi industry while ensuring operators of UBER or like Ride Sharing applications are licensed to ensure consumer protection and public safety”
Our City will look at similar licensing to the City of Edmonton where its City Council approved Uber’s operating on a new licensing regime.
In sum, Uber’s email campaign failed but Merulla’s original motion was already little more than a gesture which will have no impact upon how things are operating – Uber is driving and the City is fining.