The Tivoli condo development on James Street North is moving forward with the developer seeking heritage work permits.
The primary question now is what to do with partial remains of the lobby of the heritage designated building at the rear of the property at 108 James Street North.
Building fronting onto James was demolished in 2004 after a structural failure of the south facade. The auditorium at the rear was not affected directly by the collapse. However, it was already in poor condition and has been further damaged by water and elements since 2004.
As part of the condition of approval for the 73.5 metre, 22-storey building condo building to front onto James Street, the condo developer is required to create a new lobby for the auditorium.
Council says it will not grant building occupancy until the auditorium is restored, as a condition of approval.

The Remaining Portion of the Lobby 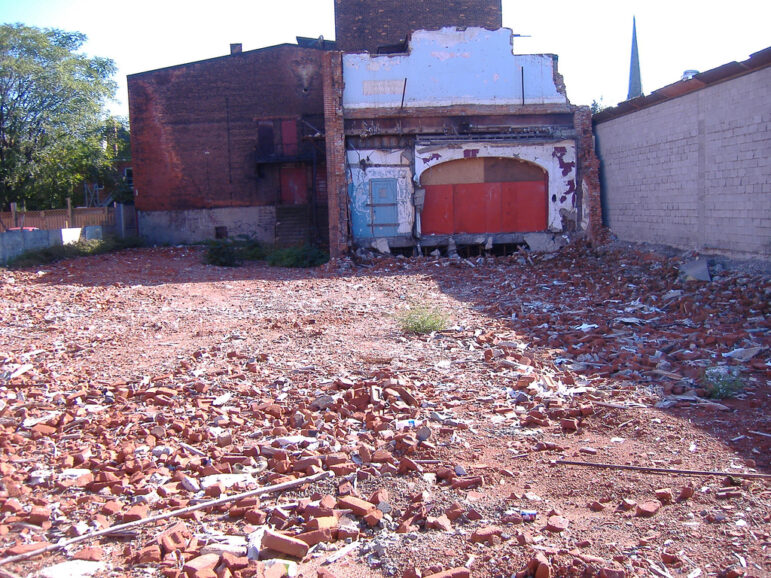 Tivoli Site shortly after demolition in 2005.

Hauser presented the Heritage Permit Sub-Committee with two options for the redevelopment of the lobby during a “pre-application consultation” hearing to assist the developer to create a heritage permit application which the Sub-Committee will accept.
Option one is to integrate the remaining portion of the lobby into the new Tivoli lobby. Option two is to demolish the remanent and build an entirely new lobby.
Hauser told the Sub-committee that option two will allow for new washrooms and fully AODA accessibility for persons with disabilities, a full integration with the new condo tower at the front, a connection to James Street, and better
The entire site is heritage designated, with the “coffered ceiling” of the lobby specifically cited.
It is worth noting that the portion of the lobby remaining will not form any part of the base of the tower and its fate will not impact the residential development.

There was little discussion at the sub-committee as they heard Hauser’s presentation. A few questions were asked.
Committee members seem content to await a formal application before offering public committee.
The Tivoli developers will submit their formal heritage permit application to the City’s heritage staff for consideration.

Process for Heritage Permit and Decision on Lobby

Once submitted to heritage staff, the application on the future of the lobby will likely proceed all the way to Council.
Officially, the permit can be approved by City staff under delegated authority. Considering the high profile of the site and development, staff tell The Public Record they can expect to have the permit follow the full public process.
This process will include a hearing at the Heritage Permit Review Sub-Committee, a full debate and public delegations at the Hamilton Municipal Heritage Committee, then Council’s Planning Committee before ratification by the full Council.

We should see some work on the site in spring as the developers work on soil remediation.
Drew Hauser of McCallum Sather Architects told the Sub-Committee on Tuesday that the Tivoli developer is starting soil cleanup and remediation for the condo development at the front of the building. As the architect, Hauser didn’t provide details on this, it stated as part of the timeline discussion.
The Tivoli site was originally used as a carriage factory at the turn of the century. Current environmental laws require remediation of former factory sites for residential developments.

While still preliminary, Hauser did share some interesting ideas for using inspiration from the Tivoli auditorium’s design into the condo tower.
The proposals need to go in front of the City’s Design Review Panel and Hauser emphasised the perspectives provided in his presentation to Sub-Committee were for illustrative purposes only.
As the proposal is in its very early stages, and will likely undergo substantive changes, I’m choosing to not post them at this time. As soon as a formal heritage application is filed, The Public Record will post the most substantive images.
In sum, the project is moving forward, there will be a substantive discussion of the heritage integration with the new condo tower, and the condo tower itself looks to be on the path to have unique design patterns which will add to James Street North’s artistic character.