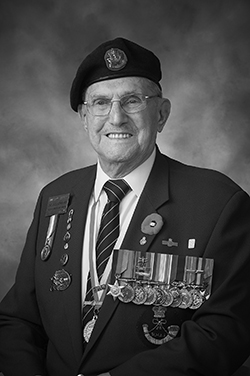 One of Hamilton’s best sons died this morning at the age of 95. Jack McFarland was a connective force in Hamilton’s civic fabric for over 60 years earning many honours including induction as a Knight of the Order of the French Legion of Honour and Hamilton’s Gallery of Distinction.
Born on Locke Street in 1921, McFarland joined the Royal Hamilton Light Infantry in 1936 at age 15.
He served with the regiment during the World War II and continued in active service for nearly 40 years. 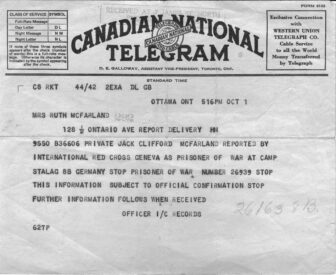 Private McFarland was among the 582 RHLI soldiers who fought on the beaches of Dieppe, France, during the disastrous raid of August 19, 1942.
By the end of the raid, 197 of the 582 were dead, only 211 returned to England and 109 of them wounded. Private McFarland was among the 174 who became prisoners of war.  He was wounded and treated by the Germans.
He spoke of his capture and treatment in an interview with The Memory Project:

We were taken to a first field dressing and I think the ladies that were there, I think they were German air force medics, nobody introduced them naturally but, and they gave us a tetanus shot. I thought they were doing bayonet practice, they put a long needle right through our clothing into our stomach and gave us a shot of tetanus, anti-tetanus I guess. I hadn’t been bandaged or anything yet. I didn’t get that until I got to Rouen. I was a month in Rouen and then, believe it or not, by a hospital train, to Landsdorf. I was then taken to Lazarett, which is the hospital in the prison camp and I was there for several weeks. They treated me there. I had no complaints. A British doctor once told me, he said, you must have had a darned good German doctor, he said, or I would have taken that arm off the minute I saw it. 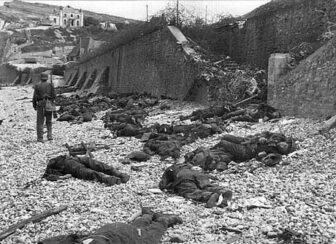 McFarland was freed in January 1945 and volunteered to serve in the Pacific theatre after his repatriation. In June 1945, he stationed in Vernon, British Columbia preparing to join the expected invasion of Japan. The War ended in early September and McFarland was discharged in November 1945 at the rank of Sergeant.
Returning to Hamilton, he reenlisted in the RHLI in 1946. He joined the Hamilton Police as a Constable, and became active in many veterans groups and activities. 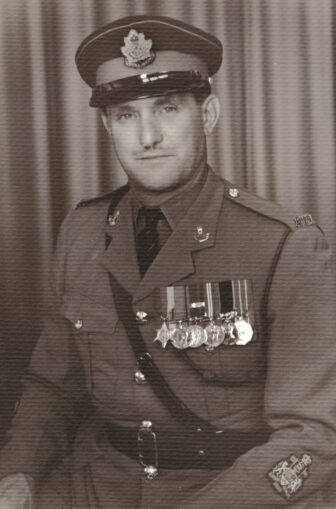 McFarland continued to distinguish himself in the militia, rising to become the highest ranked non-commissioned officer of the Royal Hamilton Light Infantry, serving as Regimental Sergeant Major.
Following his term as RSM of the Rileys, Chief Warrant Officer McFarland was appointed as the Chief Warrant Officer of the Hamilton Miltia District – the highest position in Hamilton for a non-commissioned solder. He retired from the Canadian Forces in 1975.
McFarland retired from the Hamilton Police at the rank of Staff Sergeant in 1981.
A tireless advocate for his fellow veterans, McFarland served for decades on Hamilton’s Veteran’s Committee and was an active member of veteran’s organizations including the Royal Hamilton Light Infantry Association. He was honoured in 2007 with a Minister of Veterans Affairs Commendation for this work.
McFarland was tireless in ensuring the memory of Dieppe and all the men who fought in the battle was not forgotten. He lead the committee which successfully persuaded the City to build the Dieppe Memorial on the Hamilton Beach Strip as chair of the park committee. He was active in the Prisoner of War Association of Canada-European Theatre, frequently visited schools, and spoke of his experiences at Dieppe. 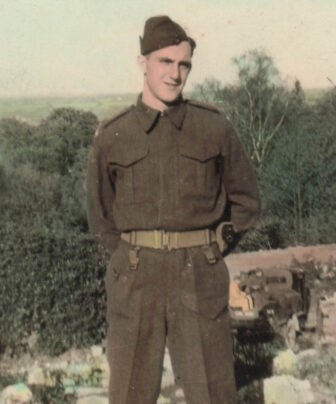 McFarland was made a Knight of the Order of the French Legion of Honour in August 2007 and presented the decoration by the French Ambassador to Canada. In 2008, he was honoured by the Governor General of Canada with the Caring Canadian Award.
In 2015, the City of Hamilton bestowed its highest honour for a lifetime of service to the community, inducting McFarland into the Hamilton Gallery of Distinction.
In recent years, McFarland spoke with the Memory Project about his experiences during the War. The Project posted a six minute audio excerpt. In August 2003, 61 years after the raid, McFarland was interviewed by his regiment, the RHLI, about his experiences.
On the 70th anniversity of the raid, McFarland’s story was featured in a segment which aired on CBC’s flagship newscast The National
Details of McFarland’s funeral and visitation will be released by the RHLI in the coming days. 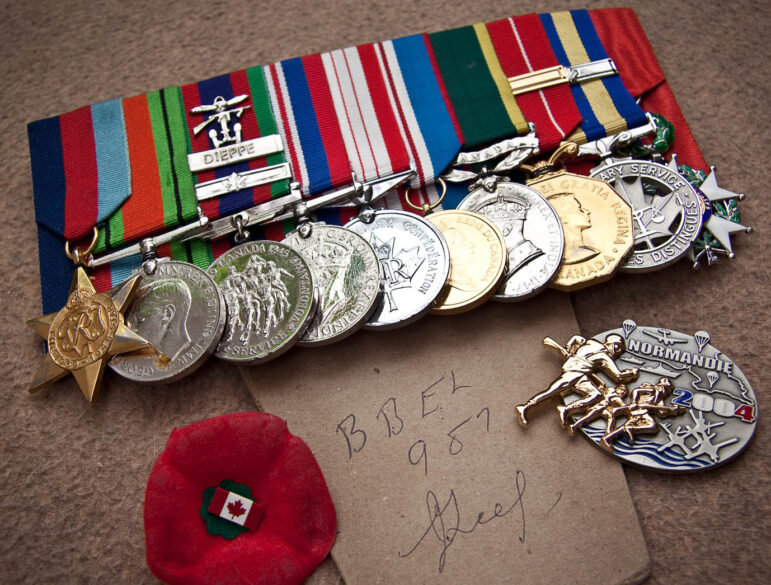