The City of Hamilton is declaring victory in its fight against Bell Canada at the Canadian Radio-television and Telecommunications Commission (CRTC). However, its unclear if they won based upon the CRTC’s siding with Bell Canada on a few important issues in a decision issued on Wednesday.
The City took Bell Canada to the CRTC in a dispute over the terms of a new Municipal Access Agreement (MAA) governing access and use public right of ways for its infrastructure.
The two-year legal battle (the City did not disclose costs) was a landmark battle drawing interventions from numerous telecoms and municipalities as both sides sought to have the CRTC set new standards for the thousands of MAAs across Canada.
The City and Bell could not agree to a new MAA. The City complained Bell Canada was not meeting municipal standards or requirements when installing infrastructure. The City cited 69 “instances of non-compliance and non-performance by Bell” over a four year period in its application to the CRTC.
This 69 incidents included installing infrastructure without permits and road cuts that do not repair the road to previous conditions, and Bell or its contractors entering City construction sites without following protocols.
The City filed its application on August 22, 2014 and included a request for the CRTC to prohibit Bell from installing new infrastructure until the hearing was complete. In June 2015, the CRTC denied the City’s request for a freeze on Bell installations.

The most significant issue in front of the CRTC was deciding how much the City must compensation Bell for moving infrastructure during City capital projects.
The City asked for a seven-year “sliding scale” for compensating Bell, with 100% compensation in the first three years and decreasing to no compensation for Bell infrastructure older than seven years.  The City based its request upon the existing 10-year sliding model in Vancouver.
Bell argued seven years did not reflect the life-cycle of its infrastructure and asked for a allocation using what is called the “Baie-Comeau Model” after the 2008 CRTC decision which created it. It’s a much most complex calculation model than a sliding scale.
The CRTC gave Bell a substitute gift – a 16-year sliding scale, more than twice as long as the City of Hamilton asked for. 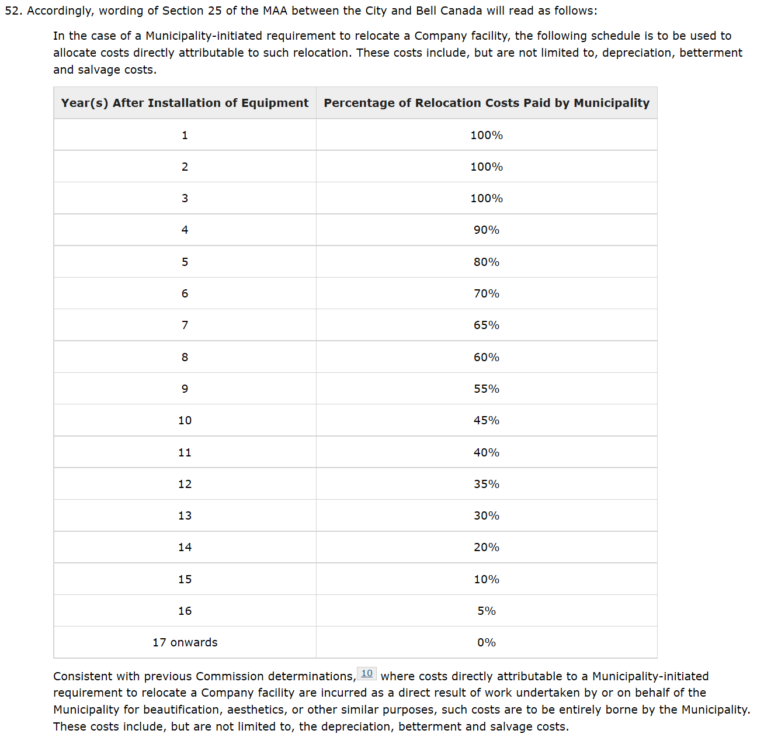 Chart for Cost Allocation imposed by the CRTC decision.

Both sides can declare victory, and its a subjective decision on who actually won. Reading the decision, for Bell, a 16-year lifecycle on cost allocation is a big win.
Bell did agree to the City’s standards for road cuts and other restoration of municipal facilities – which was the original reason the City dug in its heels and took the matter to the CRTC.
For the intervening parties, this CRTC decision will guide similar negotiations across the country. It is much needed clarification on cost allocation as fibre optics and other more expensive telecommunications infrastructure becomes the norm in public right of ways.

HATTIP: Thank you to CARTT.ca for flagging the ruling. As an industry focused site, I relied on their past articles as background on the history of the CRTC hearings on this matter.