I’m sick and tired of writing this storyline over and over again, and after talking with Hamilton’s General Manager of Planning and Economic Development Jason Thorne, it’s obvious he’s tired of reading stories and being beat up by everyone outside of City Hall about road-widening.
When I asked for staff comment on this story, Thorne was the person to respond – reflecting the sensitivity of the file and importance to Thorne of communicating the City’s message on the road-widening issue.
The short: the City has a road-widening on the books for a six-lane Barton Street and Thorne wants it to be known that staff are working to add discretion to waiving road-widenings. He does not wish to see a repeat of previous road-widening battles.
Thorne says staff are bringing a report to the Planning Committee during mid-February to mid-March which will give the Director of Planning discretion on road-widenings. At present, road-widenings can only be waived by Council.

The Road-Widening Issue on Barton

The City’s arcane zoning bylaws requiring road widening allowances on pretty much every lower-city arterial road, the City’s policies require that Council waive the widening on a case-by-case basis, and we constantly see absurd requirements having a chilling effect on positive in-fill development by adding uncertainty and costs to projects with thin profit margins to begin with.
The latest example is 647 Barton Street East, at the corner of Earl Street between Sherman Avenue and Wentworth Street. 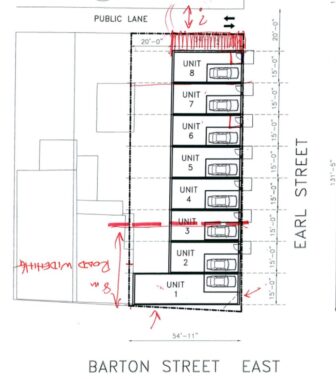 Harry Stinson originally purchased the property, a vacant parking lot which was an illegal dumping ground, as a hedge against the City demanding additional parking for his nearby Gibson Lofts project.
Upon sitting down with City staff for a pre-consultation for a townhome development on the site, Stinson was informed that City policies state Barton Street is subject to a 8-metre road widening.
Stinson emphasizes the City planners were “very polite and sympathetic” as “they also noted that this setback issue has come up in many other such application discussions, and that we were not the only people to “express our frustration””.

Thorne and I chatted at the Mulberry Cafe for about 10 minutes on this file and road-widenings in general. The issue comes up for nearly all lower-city in-fill developments.
Thorne says staff provided Stinson the road-widening information because it is on the books. The road-widening requirement will be reviewed by planning staff and a recommendation will be made to Council.
At present, the final decision on waiving the City’s road-widening requirements is made by Council.
Thorne says planning staff will present a recommendation to Council’s Planning Committee before spring for Council to delegate waiving road-widening requirements to the Director of Planning.
There was a lot of back-and-forth in my conversation with Thorne as I looked for something more than consideration on 647 Barton Street East.
On the surface, this road-widening waiver seems like a no-brainer, it’s not like the City’s going to demolish Barton Street tomorrow and take a chunk of General Hospital while at it.
Thorne couldn’t give a commitment to waive the road-widening as the decision remains with Council.
Thorne repeatedly stated staff must look at a wide variety of factors, including existing street character, street wall, and the merits of the development when considering a planning file.

Which brought our conversation to why isn’t the City eliminating road-widening requirements? After all, there are numerous examples of requirements where its obvious the City is never going to be able to fulfil the dreams of the 1970s and have six lane highways everywhere.
Thorne says eliminating road-widenings from the official plans would be a lengthy multiple year process, whereas changing policy to give the Director of Planning discretion to waive road-widenings only requires the forthcoming report.
Harry Stinson summed it up well when comparing the City’s road-widening policy with its economic development policies:

0 thoughts on “Road-Widening on Barton Street: Are We Finally Done This Insanity?”