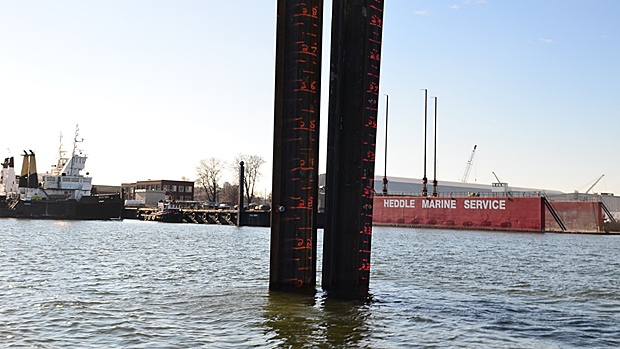 The Federal Government finds a bidder who can work within its budget for the remediation of Randle Reef.
The approximately $140-million project was originally put out to tender late in 2013, only to have no bids come in under the projected budget.
The project was scaled back and put back out to tender with the hope of finding a bid at or under budget.
Today, July 17, the Federal government’s procurement website says the contract is awarded to Hamilton’s McNally Construction.
Just after 11:00am, the Federal government put out a press statement announcing the awarding of three contracts for the work:

Today, the partners involved in the Randle Reef sediment remediation project are pleased to celebrate an important step forward with the awarding of three major contracts. These awards will allow the project to advance within the budget envelope, without compromising its environmental goals.
The Stage One Construction contract was awarded to McNally Construction Inc. The first stage of the project includes constructing the engineered containment facility (ECF) into which the contaminated sediment will later be placed. The contract for the reconstruction of an adjacent harbour wall, which is in poor condition and therefore necessary to allow dredging of contaminated sediments in Stage two of the project, was awarded by the Hamilton Port Authority to Dean Construction Co. Ltd. of LaSalle, ON. Work to re‑construct the harbour wall is expected to begin in September.
The Engineering Services contract was awarded to Riggs Engineering Ltd. They will work closely with the construction company and provide civil engineering services for the supervision of Stage One Construction. Preparations for ECF construction, including the development of a detailed project schedule, will begin later this year.

The bottom of the release includes quotes from various politicians hailing the announcement.
No hard dates have been provided in the backgrounder for the start of work.