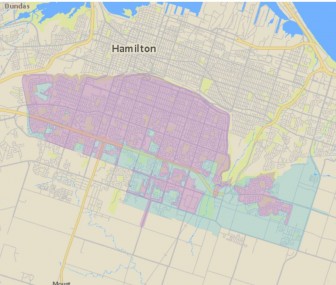 Canada Post is asking the Courts to intervene and strike down a new municipal bylaw targeting Canada Post – and Hamilton taxpayers could be on the hook for costs if Canada Post wins as expected.
“Canada Post regrets that court action is required to address the recent impasse regarding the installation of Community Mailboxes”, reads a Canada Post statement issued this morning.
“Canada Post has the exclusive jurisdiction over postal services in Canada and has the legal authority to install Community Mailboxes on municipally-owned property.”
Canada Post’s legal action follows steps by the City of Hamilton to take Canada Post to court first for violating the new municipal bylaw.
The by-law, an series of special amendments to the Roads – Equipment Installation Bylaw passed last week by City Council at an emergency Council meeting on Wednesday, April 15.
At the regular Council meeting this Wednesday, Council passed a special resolution to take Canada Post to court for contravening the bylaw.
The bylaw requires Canada Post to complete a municipal permit process prior to beginning the installation of approximately 1,000 community mailboxes in Wards 6 to 9 during the next few weeks as part of CP’s plan to discontinue door-to-door mail delivery.
The permit fee per mailbox is $200. Canada Post is offering the City $50 per box for its incremental costs.
(City staff estimate 4,000 boxes will be required for city-wide implementation by Canada Post)
Canada Post is planning to end door-to-door mail delivery on June 15, 2015 across Hamilton Mountain and urban Upper Stoney Creek.
The City of Hamilton bylaw requires Canada Post to pay the City $100,000 to begin the permit process.
The City will use the funds to create a new system for processing Canada Post permit applications and to hire staff to begin the process of reviewing each location. The City expects to spend two hours for each permit location.
The Bylaw – if the City wins in court against Canada Post – will substantially delay for years Canada Post’s plans to implement community community mailboxes in the older communities of Hamilton.

For it’s part, Canada Post ignored the bylaw.
In the past week, sub-contractors have installed concrete pads and community mailboxes across the Mountain.

Here is what I got free from Canada Post this afternoon. @FredEisenberger pic.twitter.com/KMfDjRbOqo

Federal and provincial laws require municipalities to grant utilities or similar corporations access to public property to operate their services.
The laws do allow municipalities to impose conditions of access and to implement reasonable standards.
Hamilton is becoming more assertive in enforcing standards and new municipal access agreements.
At present, the City is fighting Bell Canada at the Canadian Radio-television and Telecommunications Commission to force Bell to sign onto and obey by a new access agreement.
The City is empowered by provincial law to regulate to ensure “the protection of property, the prevention of nuisance, and the health, safety  and well – being of its inhabitants” and plans to cite this power in court.
The City’s new bylaw contains the standard bylaw passage stating “where there is a conflict in this respect between federal or provincial legislation and this By-law, the federal  or provincial legislation prevails.”
On the surface – and I Am Not A Lawyer – this appears to settle the outcome of the conflict between the Canada Post Corporation Act and the Municipal By-Law.

Hamilton, Legal Fights with the Feds, and Cost

The City of Hamilton is engaged in a long running legal suit against the Federal Government over an environmental assessment that was ordered prior to the construction of the Red Hill Valley Parkway.
The suit, which is entering its 11th year, has cost the City of Hamilton at least $3-million dollars in what a judge criticized as experimental litigation without regard to cost:

This year, the City lost more motions and added at least $39,500 to the ever growing cost to local taxpayers. This is just what the City had to pay in costs to the other side, it doesn’t account for the money paid to the City’s lawyers.
Retired lawyer David Harvey (DISCLOSURE: Harvey is a friend of mine) wrote on his personal blog of the high legal hurdles the City of Hamilton faces in winning its lawsuit.
His assessment is the City faces a near impossibility in winning the suit.
Council voted in March to continue pursuing the suit, which has yet to reach trial.
Costs continue to raise in the case. Other than Hamilton City Council and the lawyer Council is paying, nobody has given the case much of a chance of success.

It’s said that local government is the most responsive level of government. This could be true, it is definitely the easiest level of government to get your voice heard at.
Hamiltonians, the local Labour Movement, and the Canadian Union of Postal Workers turned out numerous times at City Hall to protest against the end of door-to-door mail delivery.
Where the Federal government was not listening, City Council did.
Over the past year, Council has repeatedly protested the change, requested and received a delegation from Canada Post on the issue, made attempting to stop the installation of community mailboxes a staff priority matter, and then focused on regulating the installation of mailboxes.
Council’s decision to pass the special bylaw and commit an undetermined amount of funds to the legal battle is a continuation of Council’s opposition to the end of door to door delivery.
One City Councillor is confirmed to run in the federal election later this year, and another is expected to enter the race.
Ward 7 Councillor Scott Duvall is running as the NDP candidate in Hamilton Mountain, and Ward 6 Councillor Tom Jackson is considering running for the Liberals in the riding.
Both Councillors will benefit from being strong opponents to the end of door-to-door delivery.

Costs to City of Hamilton

Unless a legal surprise occurs, the City of Hamilton will be on the hook for both its legal costs and the legal costs of Canada Post.
Council is engaged in an interesting legal experiment, one which is political and the outcome will be measured by how Hamiltonians respond to the cost of the challenge.
As one national columnist put it:
“So good luck, Hamilton. You’ll need it.”