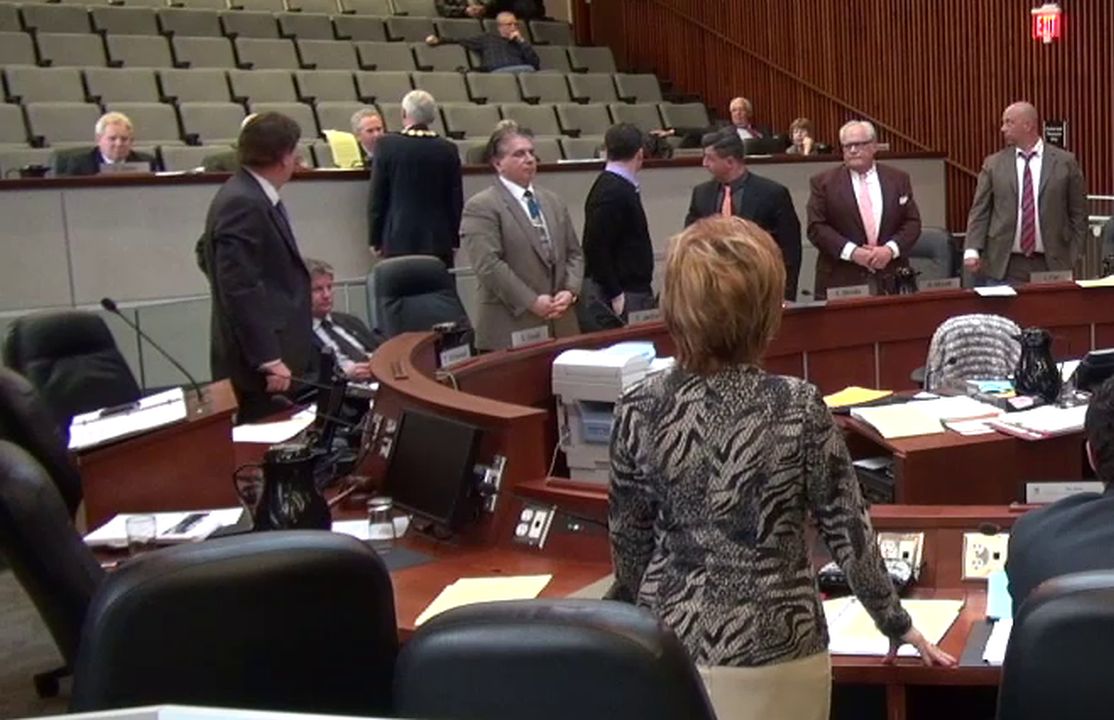 After months of delay in completing his report, Basse finds Bratina’s actions did not violate Council’s Code of Conduct.

Basse recommends no formal action be taken and says the incident had no impact on the relationship between the Mayor, Council, and staff.

During a debate on wording to reaffirm and strengthen support for Council’s position in favour of the B-Line LRT project – following comments from Bratina a week earlier that Hamilton had to choose between LRT or all-day GO service to Stoney Creek -, Council became very heated.

Bratina disagreed with the professional opinion of Murray on if adding the wording “priority project” to Council’s affirmation of support for LRT would change the dynamic of project prioritization such that other projects may not be funded if there are insufficient provincial funds for LRT.

Bratina walked over to Chris Murray and stated

Nearby Councillors are seen to immediately turnaround in surprise at the tone of the comment. Councillor Jason Farr aggressively rebukes the Mayor at the end of the meeting for the “awful nasty” tone towards the City Manager.

The video above shows Bratina walking – with purpose – to Chris Murray and the immediate reaction of those nearby to the comment. Especially telling is the reaction of General Manager Joe-Ann Priel (seat to Murray’s left) as Bratina is walking away. Priel is focused on Bratina, and appears – at the least – surprised by what had just occurred.

It is clear that the tone of Bratina’s comment was shocking to those surrounding the incident.

The Incident and Council Debate About It

He did not review the high-quality video of the meeting, instead relying upon the City’s lower quality footage stating “the Video Stream did not record the Mayor’s exchange”.

The Mayor’s tone was “angry but not threatening.”

Murray was surprised by the comments but “was neither intimidated nor threatened by the exchange nor did he feel his professional reputation was injured”.

The incident has “not affected the working relationship” between the Mayor and Murray.

Mayor Bratina apologized to Murray during the week after the incident.

Basse did not make any formal recommendations, he did make two statements of note that suggest changes for Council.

He found Councillors often engage in “side-bar conversation” with senior staff during meetings as “this serves a useful purpose in speeding up the meeting” adding, “Although I’m not in favour of such activity, as it tends to disrupt Council, the appropriateness of such activity is for Council to determine.”

Basse found that while Murray was not harmed in this incident, “members of staff often fell intimidated when making presentations before Council and Committee meetings.”

He says that is important for Committee chairs to take action to correct any “inappropriate behaviour” towards staff in the future.