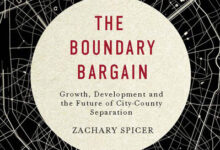 Join Us on January 12 for The Public Record at The Pub: The roots of Hamilton's Urban/Suburban Divide and What We Can Do To Fix It

Did you know Hamilton’s Urban/Suburban divide can trace its roots to the 1849 Baldwin Act?
Join us on Thursday, January 12, 2016 for a discussion of the urban / suburban divide in Ontario and what we can do to fix it with Dr. Zac Spicer of Brock University, the author of The Boundary Bargain: Growth, Development and the Future of City-County Separation
In the months leading up to the 2018 Election, The Public Record is committed to improve the civic discussion in Hamilton and will be hosting a monthly series of events we’re calling The Public Record at The Pub.

The Fraser Institute, a conservative think-tank, issued the following statement to media this morning:

CALGARY—On Thursday, July 7, the Fraser Institute will release a new study (the first of its kind in Canada) spotlighting the effects of municipal regulations on housing affordability in Toronto, Vancouver and Calgary. The study, The Impact of Land-Use Regulation on Housing Supply in Canada, analyzes land-use regulation in 68 municipalities (including 18 of Canada’s largest). With 18 of Canada’s largest municipalities looked at in their study, it seems likely Hamilton is included in the study.

The Police Services Board will discuss Chief of Police Glenn De Caire’s 2015 budget request.
Chief De Caire is requesting a 2.95% increase ($4.26-million) above the 2014 budget.
Live video Monday at 4:00pm.

Port Authority applies for series of severances to lands north of Burlington, including Pier 15 – the site of the proposed Energy from Waste Plant.
It’s a step towards building the plant, and sets up for confrontation with City over use.